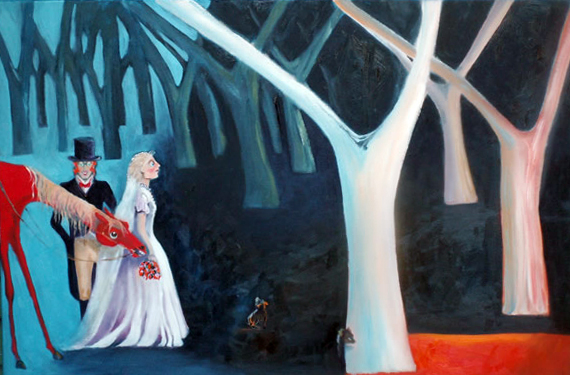 Extract from a letter from David McConnel to his mother dated October 6th 1842 .

Dear Mother,
……………….I am doomed here to lead a miserable life in the bush, as least as far as society is concerned. Fortunately I have plenty of books to amuse by study; but they will be here in three weeks. There is no female society here & I may say that I have not seen a lady for the last 10 months. I have scarcely spoken to a young unmarried lady since I came from England. Other people find the same fault with the colony, so I am not singular.  If anybody wish to come here, he should be married first, then he would have a companion to solace his weary hours; but his wife should be one who could go through hardships & could live economically. A farmer’s daughter with such education as to give her a refined taste & good manners is one for the wilds of Australia.

Mary McConnel wrote – on her arrival in Moreton Bay:

“….arriving safe in Moreton Bay, 1st May 1849. What a dreary waste of water the Bay looked. …It seemed really to me as if we had come to the end of the known world, and no other had dawned upon us. …. My husband went to secure accommodation for us in the one hotel of which Brisbane could boast, “Bowe’s Inn.” … How shall I describe it?  … I went in, and was going to shut the door when I found if I wished to do so I must put a chair against it, as there was neither handle, lock, nor bolt! Then I looked for a blind to the window, but it was innocent of such luxury, and I could not spare the one towel to make the room private.
Share Tweet Share Pin